How to Conquer Writer’s Block: Tip 46 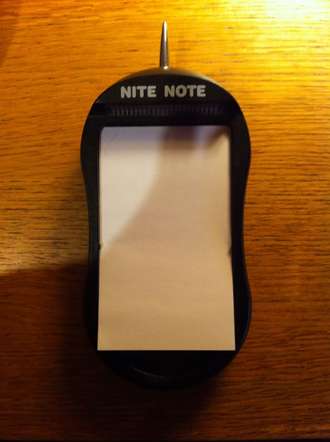 I have no stock in the Nite Note company but this little gadget has cured both insomnia and writer’s block!

Ideas often float into my mind during that state between waking and sleeping. To prevent them from floating right out again, I lie in bed ruminating, repeating and rehearsing what I’ll write at my next writing session. This is fine if it’s 7 a.m. and the dog’s begging for breakfast and it’s time to get up anyway. But if the ruminating begins at 2 a.m., I’m in trouble. Nite Note, (and it’s sold by several companies by different names), is a plastic shell holding a small little writing pad, but the genius part is the light that’s turned on when you pull out the pen at the top. You’re supposed to scribble down your idea in the dark, the soft little light doesn’t wake anyone up (even the scribbler, really), and the ruminations of insomnia are averted. Often the ideas scribbled are good ones. That place between waking and sleeping is forgiving and fruitful. Sometimes the ideas aren’t that good, but oh well. It’s a start, and bad ideas often lead to good ones, once I start writing.

I love my Nite Note.